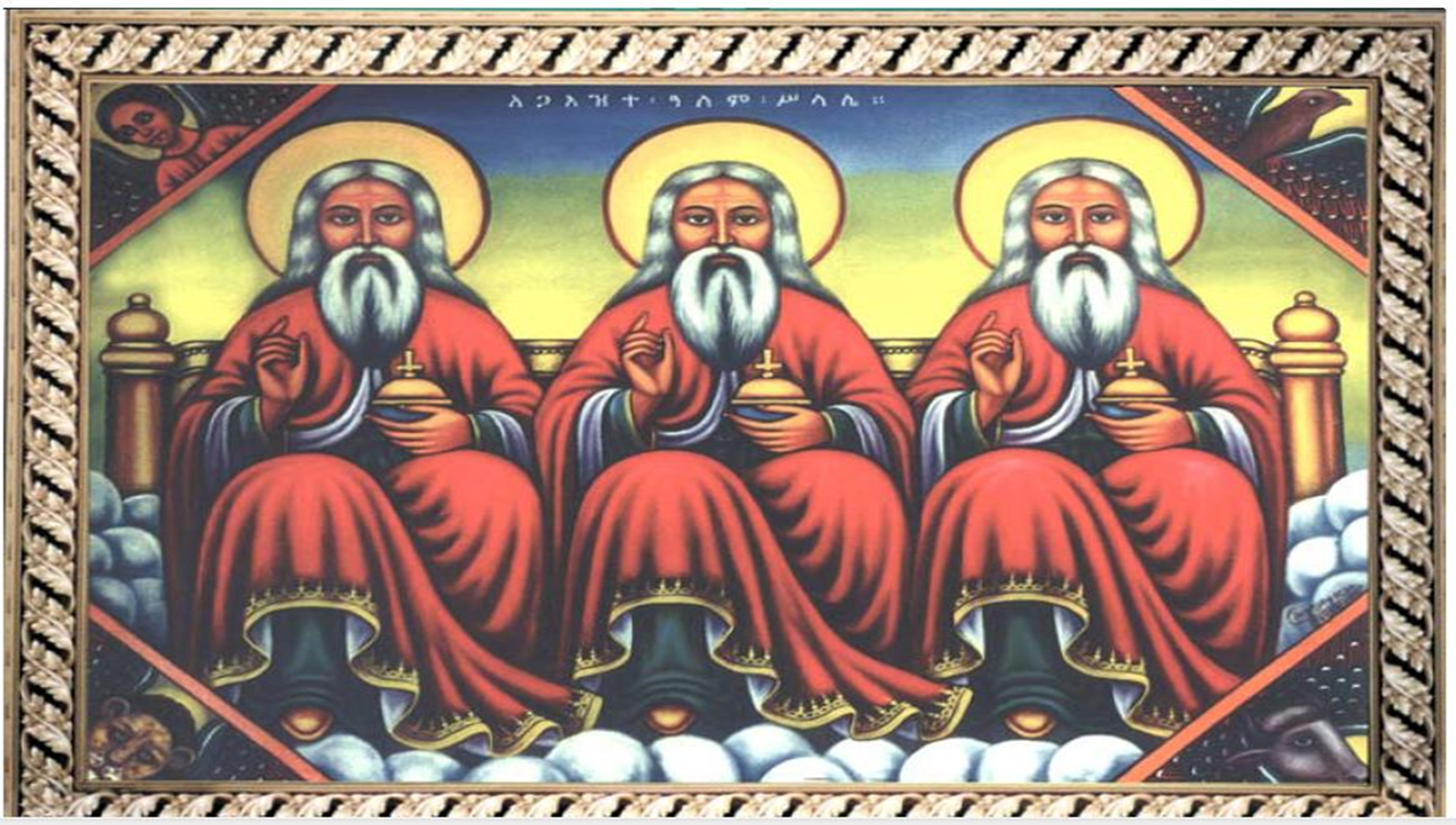 The word ‘Trinity’ means a group of three things or people. It refers to the existence of one God in three Persons. Holy Trinity a special and unique form of Trinity and it means three in One, One in three. While the mystery of Trinity is extensively stated in various scriptures, the term “Trinity” was first coined by Theophilus of Antioch (169 AD) to explain an eternally existing reality. It should be emphasised that St Theophilus of Antioch did not re-write the scriptures. He just gave a fitting term to a notion that had already been in scriptures.

Trinity: One in three, three in one

We believe in one God. God is one in essence/nature, divinity, power, action, and will (Deut 6:4, Isai 44:6, 43:1, John 10:30). We also believe in three Persons – the Father, the Son and the Holy Spirit. God is three in Person (Hypostasis), Name, and Deed (Matt 28:19, 1 Cor 12:4-6, Romans 14:17). “Nature” is what God is. But what God is in His nature and essence is incomprehensible with human mind and that no human person has ever discovered or ever will discover. What we know about God is what the scriptures have told us. St John the evangelist stated that “No man hath seen God at any time; the only begotten Son, which is in the bosom of the Father, he hath declared him.” (John 1:18) “Person” is who God is. St Gregory stated it as “When I say God, I mean Father, Son and Holy Spirit.”

Name: The Father is described as the Heart and God above or beyond us. The Son is also called the Son of God, His ‘Word’, or ‘Logos’, and God with us. The Holy Spirit is called the ‘life’, or ‘breath’ of God, and God within us. But the three are one. As the Apostle Paul stated it clearly “There is no other God but one” (1 Corinthians 8:4).

Holy Trinity in the Old Testament

Creation of Man: “And God said, Let us make man in Our image, after Our likeness.” Genesis 1:26 The plural number here indicates that God is not one Person.

Exile from Eden: “And the Lord God said, Behold, Adam is become as one of us, to know good and evil.” Genesis 3:22  The plural indicates that God is not one Person.

Confusion of tongues: Prior to the confusion of tongues at the building of the tower of Babylon, the Lord said, “Let us go down, and there confound their language.” Genesis 11:6-7. Again the description “let us” shows that God is not one person.

God’s appearance to Abraham: “And the Lord appeared unto him at the oak of Mamre . . . And he (Abraham) lifted up his eyes and looked, and lo, three men stood by him. Genesis 18:1-3. This is a more definitive appearance of God in three persons.

Isaiah’s Commission: And one cried to another and said: “Holy, Holy, Holy is the Lord of hosts; The whole earth is full of His glory!” Isaiah 6:3. They said “Holy Holy Holy” as God is three persons.

Holy Trinity in the New Testament

Annunciation: “Father sends the Holy Spirit upon the Blessed Virgin Mary, and she conceives of the eternal Son of God (Luke 1:35). The archangel Gabriel clearly mentioned the three persons: Father, Son of God and Holy Spirit.

Baptism: The Father’s voice from heaven bears witness to the Son, saying, This is My beloved Son, in Whom I am well pleased; and at the same moment the Holy Spirit, in the form of a dove, descends from the Father and rests upon the Son (Matt. 3:16-17). Here the three persons of God were revealed to the world and John the Baptist other around him witnessed them.

Transfiguration: The Father testifies from heaven, This is my beloved Son, in Whom I am well pleased; hear Him (Matt. 17:5), while as before the Spirit descends upon the Son, this time in the form of a cloud of light (Luke 9:34). This is also another major event where God revealed Himself to the three Apostles, Moses and Elijah.

Great Commission: “Go therefore and make disciples of all the nations, baptizing them in the name of the Father and of the Son and of the Holy Spirit.” Matt. 28:19 The verse indicates God is three persons – Father, Son and Holy Spirit. The singular description ‘name’ shows God is one Person.

St Paul’s Benediction: In his Benediction to Corinthians, the Apostle Paul mentioned the three persons of God as “The grace of the Lord Jesus Christ, and the love of God, and the communion of the Holy Spirit be with you all. Amen.” 2 Cor. 13:14

The Certainty of God’s Witness: John the Evangelist stated another more definitive description of Trinity as “For there are three that bear witness in heaven: the Father, the Word, and the Holy Spirit, and these three are one.” 1 John 5:7

Man: Man who is created “in the image of God” (Gen 1:26) is one of the best analogies for the Truth of the Holy Trinity. Man is of one humanity possessing a mind and a spirit. Personality, mind, and spirit comprise just one human being.

Fire: It is written, “Our God is a consuming fire” (Heb 12:29). Fire can be used as an analogy for the Holy Trinity for fire generates flame, light and heat. Nevertheless, the flame, its light and its heat are one entity. From the moment the flame begins, from that moment light and heat also begin.

The Spring of Water: “The wellspring of wisdom is a flowing brook” (Prov 18:4). The well (fountain), spring and stream (river) have been used as an analogy for the Holy Trinity. Just as the spring and the stream produced from a well are not separate. There are in fact three visible objects and three names. They all have the same water.

Modalism: This heresy states that there is but one God who simply reveals Himself through three different modes, or roles. Father, the Son, and the Holy Spirit are not distinct personalities, but different modes of God’s self-revelation. There is only one God, but that this one God reveals himself in different ways and different forms – sometimes as Father, sometimes as Son, sometimes as Holy Spirit. The Trinity is like water because water comes in three forms – ice, water, steam. This is Modalism because these are three states or modes of the substance water.  But it’s written that “For I am the Lord, I do not change” Malachi 6:3.

Partialism: This heresy states that Father, Son and Holy Spirit together make up God. This would suggest that each of the persons of the Trinity is only part God. The three only becoming fully God when they are together. But Trinity means there is exactly one God; There are three really distinct Persons -Father, Son, and Holy Spirit. Each of the Persons is God.

Arianism: Arius taught that “There was a time when the Son of God was not.” He insisted that Son of God was not truly God. He added that the Son was merely the highest of created beings, and in that sense we could call him a god. This belief is virtually identical to the present day heresy of the Jehovah’s Witness. It has been denounced at Council of Nicea (325 AD). The Word was God. John 1:1

Mecedonianism: This is a heresy that denied the full personality and divinity of the Holy Spirit. According to this heresy, the Holy Spirit was created by the Son and was thus subordinate to the Father and the Son. But God is one in essence but three in Person—Father, Son, and Holy Spirit, who are distinct and equal. This heresy has been denounced at Council of Constantinople (381 AD). The Holy Spirit is God. John 3:5 Acts 5:5

Trinity is Three in one and One in Three. The Trinity is not three persons who together make one God. Trinity is not three Gods joined together. Trinity is not three properties of God. Our forefathers have stated this as “The Father is God, the Son is God, the Holy Spirit is God. They are called one God but not three Gods.” (Apostolic Athanasius Faith of the Fathers Ch. 24 Part 4 Verse 4). In addition, the Holy fathers stated the mystery of Trinity as “Even though we say the Trinity are three in name, in deed and in person; the three are one in essence, in divinity, in existence and in will; we do not mean three Gods but one God. While the Father and the Son and the Holy Spirit exist in their own perfect person, they are one in existence” (Abulidis, Faith of the Fathers, Ch. 40 Verse 4:6).